Rani Avantibai / Avanit Bai Lodhi; died 20 March 1858, was a Lodhi-warrior-queen in the area now known as Madhya Pradesh. After the death of her king Vikramaditya Singh, the British refused to allow her to succeed the throne and placed Ramgarh under their administration. Avantibai vowed to fight the British to regain her land and her throne. She raised an army of four thousand and personally led it against the British in 1857.
On 20 March 1858, facing imminent defeat, she killed herself with her own sword. 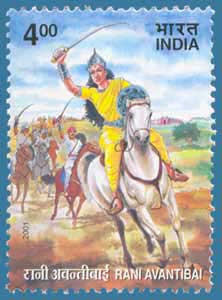